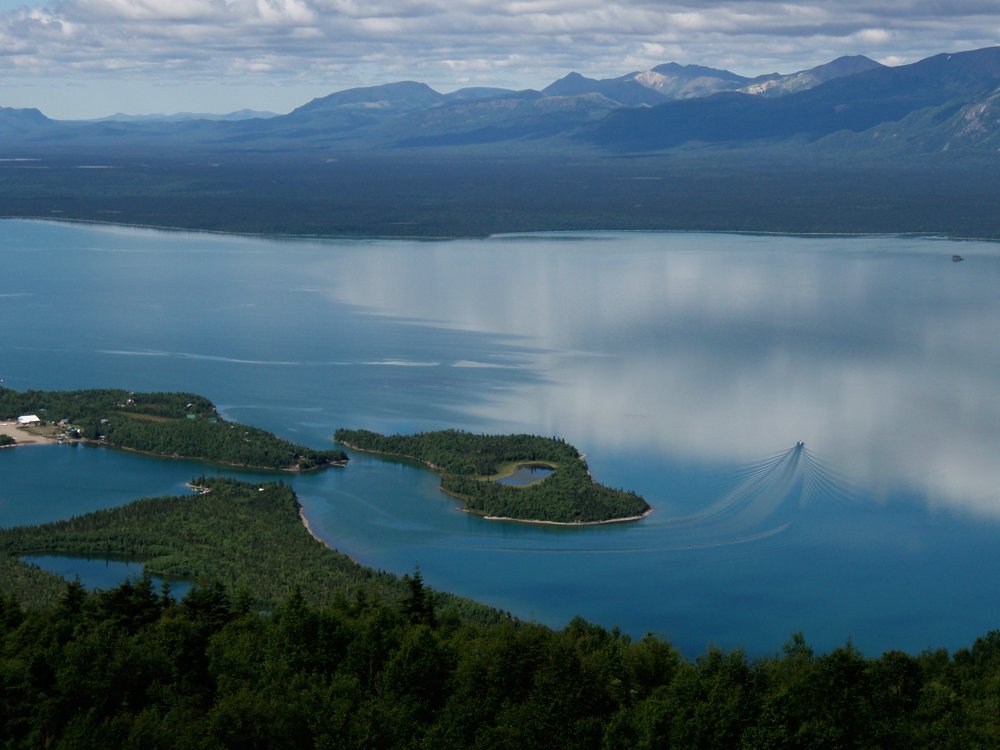 The Splendid Solitude of Alaska’s “Alps”

Only 90 Air-Minutes from Anchorage, Lake Clark Could Be America’s Most Under-Appreciated National Park

As a frequent visitor to America’s national parks, I learned long ago to accept crowds and congestion as part of the price of admission. I’ll grumble when I find myself eating the dust of a dozen noisy hikers just ahead of me on a trail. But I have to concede that it’s their place to enjoy too. When it comes to the parks, I’ve learned, finding true solitude in the midst of great natural beauty without spending days of precious travel time to get there can be a serious challenge.

One wonderful exception is Lake Clark National Park and Preserve in south central Alaska. Encompassing about four million acres (roughly twice the size of Yellowstone) on the northern Alaskan Peninsula, it is one of the few parks that delivers it all – spectacle, solitude, and relative accessibility.

Even before our small plane landed in Port Alsworth, a village of 100 at the southwestern end of the park (and nearly 150 miles from the nearest public road or highway), I knew we were in for a special experience. After leaving the lowlands west of Anchorage, we flew into the dark, rugged Chigmit Mountains, sometimes called the “Alaskan Alps” because of their remarkable resemblance to the far more famous European peaks. We were now over the park itself, flying low through Lake Clark Pass, a succession of dramatic peaks, many separated by equally dramatic glaciers. At one point, I remember looking down to see two Arctic swans drifting in a lazy glacial melt.

From our base in Port Alsworth, we spent the next two days enjoying just some of the park’s other attractions. One highlight was a hike along the park’s only official trail, a path leading from Port Alsworth to Tanalian Falls, an avalanche of water pouring down around both sides of a magnificent black rock, and then on to peaceful Lake Kontrashibuna, where we saw the Chigmits from still more intriguing vantage points. Another highlight was a boat trip along gorgeous, glacier-fed Lake Clark, with its rugged coastline that stretches for more than 40 miles.

My only regret is that we didn’t see more of a park that includes two active volcanoes, a complex network of lakes and rivers, and wildlife ranging from brown bears and bald eagles to herds of caribou and Dall sheep. Fishermen will also have a field day here. The park’s rivers and lakes have plentiful numbers of Dolly Varden trout, northern pike, and five different kinds of salmon: chum, king, coho, humpback, and sockeye.

Where are the crowds?

Estimates vary, but everyone I talked to agreed that Lake Clark is one of the least visited of the U.S. national parks. Yosemite, for example, receives about four million visitors a year and the Great Smokies about seven million. Estimates for Lake Clark range from one to three thousand. And from our perspective, that seemed high. This was early August, prime tourist time, and we just didn’t see many people.

The scarcity of people was a revelation for us. It freed us to focus on the natural surroundings more closely and deeply, and it allowed us to get to know the people we met much better. In the “Lower 48,” I’ve gone on ranger-led hikes that consisted of one ranger and 70 tourists. Our hike to Lake Kontrashibuna consisted of one ranger, two other people, and me. The ranger, a very knowledgeable and dedicated young woman, was great company for the entire day. Like the preferred Nordstrom’s customers who have their own “personal shopper,” I felt that – for the day, at least – we had the good fortune of having our own “personal ranger.”

Having our personal ranger was a surprise, but perhaps even more of a stunner for me was Lake Clark’s relative accessibility. Depending on flights to Anchorage and then the connection via Lake Clark Air, you can get there from many U.S. airports in less than a typical working day. While we made other Alaska stops before going to Lake Clark, our trip home was amazingly simple. After a leisurely breakfast and a few goodbyes in Port Alsworth, we were off to Anchorage and then to our home in the San Francisco Bay Area. The entire trip – Port Alsworth to our front door 30 minutes from the San Francisco Airport – was less than eight hours. (This included an enjoyable hour at the Alaskan Art and History Museum in Anchorage between flights.) It was actually faster and easier for us to visit Lake Clark from our California base, than to fly and then drive to Glacier, the Great Smokies, Acadia, and dozens of other wonderful but far more crowded parks.

Great natural beauty, freedom from crowds, and relative accessibility – it’s an unbeatable combination for many of us who visit the national parks, especially during the peak visitor periods. In dozens of trips to parks across the U.S., I’ve never found a park that delivers on all three more completely than Alaska’s Lake Clark.

Lake Clark is open all year. But most travelers visit during the summer, usually during July and August. Unlike many other prime Alaskan destinations, Lake Clark offers relative solitude from mosquitoes for most of this time. Another plus for those who hate crowds of another kind!

There are several lodging choices in Port Alsworth. For more information, check out the Lake Clark National Park Lodging Guide

How to Get There

Since Port Alsworth is accessible only by air, the easiest way is to get there is via Lake Clark Air , which flies very reasonably priced flights each day to and from Anchorage.

Weather is changeable, so layering is usually the best clothing strategy. But, during the summer months, the temperatures will remain in the moderate range, so there’s no need for clothes designed for very cold weather. While the odds are against having mosquito problems, it never hurts to be prepared with repellent and head netting. And, since this is Alaska, rain gear is essential.

PrevBest Time to Ski the Alps Before they Are Gone
Your 2013 Travel Resolutions? Here Are 5 to Mull Over.Next