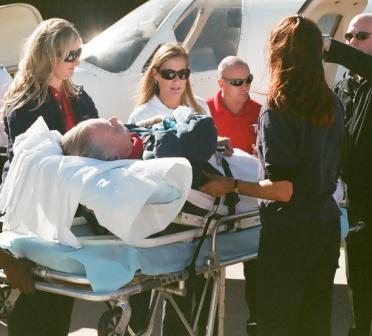 How Much Is Enough Travel Insurance Coverage for Medical Evacuation?

It was one of those travel horror stories we sometimes hear… and cringe at while we’re listening.

A California widow with mild emphysema had told her three adult children that she wanted to sign up for a tour in Nepal. They were delighted, and, to be on the safe side, they asked her to get some travel health insurance before she left. She agreed.

But, once she was in Nepal, the elevation dramatically affected her emphysema, making it impossible for her to continue with the tour. So, the tour leaders put her in a local clinic. From there, she phoned one of her sons and asked what she should do. When the son asked about the travel insurance, she confessed that she had not purchased any.

Soon, the children contacted Milan Floribus, the founder, vice president, and COO of San Diego-based American Care Air Ambulance. While sympathetic to their situation, he estimated the cost to fly the mother back with proper medical support at $172,000.

“When they heard this, they almost had heart attacks,” Floribus recalls. “But their choice was either to bring her back or to leave her in Nepal. So, somehow they came up with the money. But, imagine if they couldn’t. What would they do then? What could they do?”

The High Cost of Not Being Covered

Floribus—who works frequently with On Call International, a leading provider of health care, legal, and other vital services for travelers whose resources are available to all TripInsurance.com clients—also notes that these kinds of stories are not all that rare. While the number of Americans who purchase travel insurance policies, especially for trips abroad, has increased dramatically in the last decade, the vast majority (estimates range from two-thirds to three-fourths) of international travelers still don’t purchase policies. And, while most travelers never encounter crises such as this, thousands of them do each year. In his 19 years running American Care Air Ambulance, for example, Floribus and his team alone have handled more than 5000 medical evacuations.

For Floribus, getting travel insurance, especially when traveling internationally, is a no-brainer. “When you think of how much the cost of not having insurance can be, it can be very painful,” he says. “I’ve talked with families who’ve had to take a second mortgage on their homes just to get a loved one home. And, in some cases, all or a big part of peoples’ life savings are wiped out.”

How Much Coverage Should You Get?

While having travel insurance is crucial, an equally important issue for Floribus is the amount of coverage people take out for medical evacuation on their policies. “A medical evacuation is a very complex and costly operation,” he emphasizes. “Depending on all the variables, it can be anywhere from $50,000 to $250,000. And, when they take out travel insurance policies, people often radically underestimate the amount of coverage they would need in the event of such an emergency. Yes, $50,000 is a lot of money, and it will probably get you back to the U.S. from Mexico. But it won’t get you one-fourth of the way back from Asia or Australia. So, if you are covered for $50,000 and your cost is $200,000, then your out-of-pocket expense is going to be $150,000.”

As a general rule, Floribus recommends that people tie their level of medical evacuation coverage with their destinations. In other words, if they are traveling farther away from the U.S., they should purchase a higher level of coverage. If traveling to a nearby country such as Mexico, for example, the cost of air evacuation will probably be about $50,000. An air evacuation from Europe might be about $100,000. And an air evacuation from more distant locales such as Asia, Australia, or South Africa can typically cost $200,000 or more, depending on the circumstances.

The chances are, of course, that you or a loved one will never have to be airlifted out of a foreign country with a medical team at your side. But, in any event, it’s simply good planning and good sense to be adequately covered.

To learn more about American Care Air Ambulance, its people, and its services, visit its website at www.americancareairambulance.com or, if you would like, check out this article.

If you would like advice on the amount of medical evacuation coverage you should get for an upcoming trip, feel free to call our toll-free number at 877-219-8169 or email us at support@TripInsurance.com.

Dan has traveled around the world for both business and pleasure. During his years working in high-technology start-up companies he traveled extensively throughout Asia, Europe, and the Americas. Dan and his family also travel extensively for pleasure. Although it is challenging for him to choose a favorite destination, he gravitates toward France and Japan. Dan prides himself in the ability to travel anywhere, for as long as necessary, with a single modest carry-on bag. He also has an enormous respect for local cultures and customs. Dan is President and Founder of TripInsurance.com, the online source for comprehensible, and affordable travel insurance. Dan decided to form TripInsurance.com when he encountered his own frustrations trying to navigate the insurance options for his own vacation and business travel needs. See me on Google+
PrevConsidering Travel Insurance with Car Rental Coverage
Becoming a Voluntourist—Helping Others Around the WorldNext