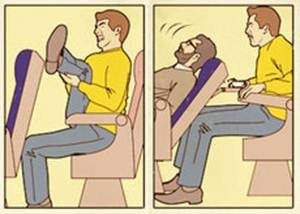 The Height of Indignity – Too Tall to Fly

We recently posted a blog entry about overweight people and the danger they can pose to airplane travel. We received a lot of response to this article, and no, we are not biased against fat people. The truth is that many of us are just too big to travel comfortably in today’s aircrafts. The population around the world is continuing to become larger, not just wider but taller as well, and the airline standards have not kept pace with human evolution. Being too large, whether it’s too wide or too tall, for the aircraft is a growing problem that will need to be addressed sooner rather than later.

I was struck by this problem on a recent trip to Scandinavia. As I watched the passengers enter the aircraft I noticed all of them, men and women alike, were over six feet tall. Each one had to stoop to enter the plane and then fold themselves into their seats.

This is an increasingly common problem as airlines strive to pack more passengers into their aircraft to try to increase profits. Although there is no established standard for seat pitch (i.e. the distance between that same points on two seats in an aircraft, which is generally 30-32 inches in Economy Class), seat pitch does vary from airline to airline, and even an inch makes a huge difference in terms of your comfort. One ABC news story tells of a 6-foot, 7-inch tall man who had to stand on a Spirit Airlines flight between Florida and Chicago because he was too tall for his seat; Spirit Airlines maintains an Economy Class seat pitch of 28 inches on its Airbus A321. Another news item tells of Horizon Airlines removing a 6-foot, 9-inch tall passenger for being too tall for the aircraft.

If you are over six feet tall, chances are you are uncomfortable flying Economy Class. There are some steps you can take to minimize the discomfort:

1. Choose the aisle seat. It will be challenging keeping your legs out of the aisle to accommodate the food carts, but it’s better than trying to fold yourself into a cramped window seat for the duration of the flight. If you can, switch with another passenger. You might consider buying the passenger a drink in exchange for an aisle seat, but you’ll find most people are very accommodating.

2. Try to get a seat in an emergency exit row or on the bulkhead. These seats are not limited by the seat pitch rules and tend to have more legroom. You can usually choose a bulkhead when you book, but you can’t choose an emergency row in advance. When you check in, explain to the boarding gate agent and see if they can accommodate you with an emergency row. If they can’t, see if you can switch with another passenger. The offer of a free drink goes a long way here as well.

3. While you are buying people drinks to survive the flight, you might offer one to the passenger in front of you, and ask them if they would refrain from leaning their seat back. Explaining your physical problem, and that you want to avoid sticking your knees in their back, might convince them to give you a break.

5. Try to board the plane just as soon as they call your seating group. You must stow all your luggage in the overhead bin if you want to have a place to put your legs. Check your bags if you think that you might have trouble getting overhead bin space. Often, if the flight is full, you can check your bag at the gate for free if you explain to a gate agent that you are too tall for the average seat.

6. Sites like Seat Guru can help you find the best seats on the airplane with more leg room. http://www.seatguru.com.

Note that passengers who are too short have their own issues when it comes to airplane comfort. If your legs are too short to reach the floor, it can be incredibly uncomfortable having your feet dangling for the entire flight. It’s also not good for your health since the seat cushion cuts off circulation in your legs. To alleviate pain and stress, try using an inflatable footrest. If you have a window seat you can use the footrest to alleviate stress throughout the entire flight and not disturb your seatmates. It is a good idea to put a pillow behind your back to shorten up the length of the seat cushion to take the pressure off the back of your legs. Few airlines provide pillows now so you will need to bring your own, or fold up your jacket and place it behind your back to move you forward in the seat.

Dan has traveled around the world for both business and pleasure. During his years working in high-technology start-up companies he traveled extensively throughout Asia, Europe, and the Americas. Dan and his family also travel extensively for pleasure. Although it is challenging for him to choose a favorite destination, he gravitates toward France and Japan. Dan prides himself in the ability to travel anywhere, for as long as necessary, with a single modest carry-on bag. He also has an enormous respect for local cultures and customs. Dan is President and Founder of TripInsurance.com, the online source for comprehensible, and affordable travel insurance. Dan decided to form TripInsurance.com when he encountered his own frustrations trying to navigate the insurance options for his own vacation and business travel needs. See me on Google+
PrevCommon Sense Can Eliminate Theft at Airport Security
Cruise Radio Interview: What Are Pre-existing Conditions?Next