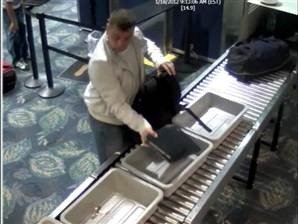 Travel broadens the mind, and it also takes people out of their native environment making them more susceptible to problems such as theft. Too few people take routine precautions when they travel, and the result is they lose out. You need to be wary of those around you, even when you are dealing with routine travel issues, such as airport security.

A friend told me a disturbing but true story the other day which I will share here as a cautionary tale for my fellow travelers. A gentleman was passing through security at San Francisco airport and as he was passing through the metal detector, he removed his expensive Rolex watch and placed it in the tray along with his change and his car keys. As he was going through the body scanner there was a delay, and he hurriedly reclaimed his possessions on the other side of the security gate, only to discover his watch was gone.

The traveler reports the theft of his watch to the TSA agent. The police are called and they identify the thief from the security tape that records everything that happens in the security line. Taking a printout of the image of the thief, the police then check with gate agents throughout the concourse. The thief was ultimately identified and arrested when he lands at his destination in Texas, caught red-handed with the stolen watch in his possession.

This quick-thinking traveler was able to apprehend the thief and reclaim his watch with the help of TSA and the police. However, the problem could have been avoided with a few simple precautions to keep others from gaining access to your property. The next time you have to pass through security, try the following:

1. Take your iPhone or smart phone, your watch, your keys, and anything else you don’t want to lose and put it in the outside pocket of your carry-on bag or briefcase. It’s much less likely someone will rifle through your bag than they will lift something portable and expensive from a security tray.

2. Be sure to put your belongings through the security scanner yourself. Don’t leave them on the belt for someone else to manage.

3. Wait until it is clear for you to access the body scanner or metal detector before proceeding. Try to minimize the delay between the time you place your bag on the scanner belt and you pass through security yourself.

4. And, of course, never leave your bag unattended.

When you travel, be wary and use common sense and you will have a more enjoyable journey. Remember that your journey starts the minute you walk out the front door. If you do have items stolen while on your trip, these are generally covered under your homeowners insurance. Some travel insurance policies include extra baggage coverage if your bags are stolen.

Dan has traveled around the world for both business and pleasure. During his years working in high-technology start-up companies he traveled extensively throughout Asia, Europe, and the Americas. Dan and his family also travel extensively for pleasure. Although it is challenging for him to choose a favorite destination, he gravitates toward France and Japan. Dan prides himself in the ability to travel anywhere, for as long as necessary, with a single modest carry-on bag. He also has an enormous respect for local cultures and customs. Dan is President and Founder of TripInsurance.com, the online source for comprehensible, and affordable travel insurance. Dan decided to form TripInsurance.com when he encountered his own frustrations trying to navigate the insurance options for his own vacation and business travel needs. See me on Google+
PrevAre You Covered in Case of Volcanic Eruption?
The Height of Indignity – Too Tall to FlyNext