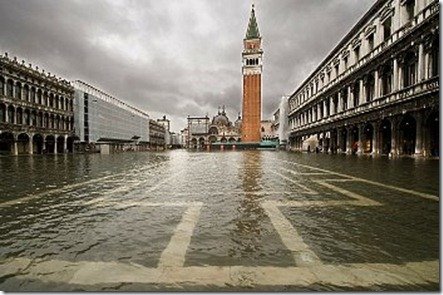 We have blogged in the past about our infographic for the 10 endangered best travel destinations.. Our last blog on the Galapagos Islands elicited some Twitter comments about visiting environmentally challenged destinations; the fact that they get more tourist traffic is a large part of the reason they are disappearing. (If you haven’t read it, I recommend the late Ray Bradbury’s story “A Sound of Thunder,” which is the ultimate tale of how unrestricted tourism can destroy the places they visit.)

There are many manmade destinations that are disappearing just as fast as endangered habitats. Venice 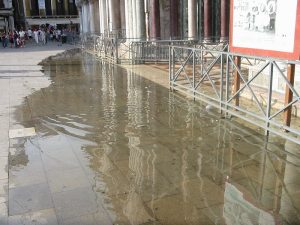 is probably the most notable. The combination of the weight of the city’s buildings and the rising sea levels has caused the water level in Venice to rise by nine inches in the last 100 years. The most visible indication is the frequent flooding of historic St. Mark’s Square. The Square flooded less than 10 times at the turn of the 20th century, about 40 times in 1980, and more than 60 times at the turn of the 21st century.

Scientists estimate that in another 70 years, Venice will be underwater. Some experts believe that Venice may be sinking five times faster than anyone realized. A new study by the Scripps Institution of Oceanography at the University of California finds the city sinking at two millimeters or about 0.8 inches per year. It’s also tilting eastward toward the Adriatic Sea.

Perhaps that is part of the reason that Venice attracted more than 21 million tourists in 2007; 40 times the number of Venice’s population.

So while you still have some time to see the Floating City, you might want to plan a trip before it becomes the sunken city. Or you might consider bringing your scuba equipment.