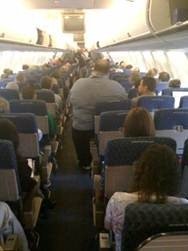 Are Americans Getting Too Big to Fly?

There have been a number of stories in the news about people being removed from flights for being deemed too big for their seats. Perhaps the most notable incident was when “Clerks” director Kevin Smith (a.k.a. “Silent Bob”) was asked to leave a Southwest flight last year because his posterior was too large for the airline seat. Smith kicked up a social media storm of protest and received a lot of sympathy, but was Southwest Airlines wrong in asking him off the flight?

As the report at the time in People explains:

Smith, 39, originally purchased two tickets “as he’s been known to do when traveling Southwest,” the airline noted, but when he decided to fly standby on an earlier flight, only one seat remained. Although he had been seated, he was asked to leave.

“If a customer cannot comfortably lower the armrest and infringes on a portion of another seat, a customer seated adjacent would be very uncomfortable and a timely exit from the aircraft in the event of an emergency might be compromised if we allow a cramped, restricted seating arrangement,” Southwest said.

Like it or not, obesity has become an issue in American society and overweight passengers create real problems when traveling. It’s more a safety issue than anything else, especially for some of the people we interact with and who want to buy travel insurance because they are concerned about security. Aircraft are designed to accommodate people of “normal” proportions, including the safety equipment, but “normal” proportions were defined back in the 60

s and 70s. Today, the average American is much larger in height, and weight.

An overweight passenger may have problems getting through a window exit in the event of an emergency. What would happen if other people became trapped because an overweight passenger became stuck trying to get out of a seat? Unfortunately, there are no regulations dictating how large a passenger has to be to be deemed too big to fly, so it’s up to the flight crew to make a judgment call when necessary. Consider the challenge American Airlines faced with the passenger in the photo posted here. This passenger clearly could not fit in his seat and his size actually blocked the aisle, making it impossible for anyone to pass, whether for regular service or in an emergency.

We believe that TSA and not the airlines or flight attendants should regulate whether an overweight passenger can board a plane. TSA will prevent you from bringing a bag through security that does not fit the cabin-restricted size and will ask you to go check the bag. In the same manner, they should set standards for the personal width restrictions for a single seat on an aircraft. If, based on these standards, you will not fit in a coach seat, then first class or a pair of seats would be indicated before letting you board. Please don’t interpret this as being prejudicial against heavy people. This is a safety issue, the same way you can’t take a full size piece of luggage into an aircraft cabin because it won’t fit without causing a safety risk for yourself and other passengers.

Here are some air travel tips if you are stockier than most:

– Try booking two seats instead of one if you can, or consider flying first class. That way you will have plenty of room, be more comfortable and fly safer.

– Remember that certain seats, such as at the bulkhead have immoveable armrests. They would not be a good choice because of seat size and the fact that a large passenger could be hurt or trapped in case of emergency.

– Try booking a window seat. Believe it or not, they are roomier than the aisle seats and you won’t have to worry about blocking the aisle, being hit with a cart, or having people disturb you by climbing over you to get to the aisle. Window seats will let you lean on the wall and not have to press up against another sweaty passenger. In addition, the air conditioning on most planes is located right above the windows along the walls, and you will find it cooler by the window.

– Avoid smaller planes and regional flights if you can. Smaller planes, such as the “puddle jumpers” that fly between local destinations, have much smaller seats and tend to be more sensitive to weight distribution.

– Request a seat belt extension. These are actually the sample seat belts they use in the safety demonstrations. They can attach these to the existing seat belt to extend it and make it much more comfortable to sit with your seat belt fastened.

– Ask for a seat located near a door exit rather than a window exit. The window exits are smaller than you might think. In an emergency, if you get trapped trying to make it out a window, you or others could be hurt.

And, of course, there is the comfort of other travelers to consider. Overweight passengers do tend to be too large for their seats because of the way most airline seats are designed. So any passenger seated next to an overweight flier is likely to be crowded and uncomfortable. If you are traveling and someone overweight is seated next to you, there are steps you can take as well:

– First and foremost, remember that your fellow passenger is just another person. Their size is not something they can control during your flight, and they were not seated next to you just to make your flight uncomfortable. Treat them courteously, like you would your own family members. Politely tell them that you will check with the flight attendant to see if they can reseat you to give you both more room to be comfortable on the flight.

– Next, check with the flight attendant to see if there is an open seat available. They will re-seat you if you are polite in your request.

– If the flight is full, as they tend to be these days, suggest your large compatriot take the window seat if you can so, they get more room and so do you. You can then get up and move about the cabin without disturbing them.

– You also can talk to the flight crew and ask to spend part of the flight lurking around the galley or using one of the jump seats. You won’t be able to linger near the cockpit, but you may be able to stand at the back of a larger aircraft. If you are respectful and polite they will probably accommodate you.

As Americans continue to get bigger, the travel industry will have to start implementing rules and regulations to accommodate overweight travelers, just as they do oversized and overweight luggage. They have to accommodate the larger members of the population, just as they have to accommodate the elderly, the handicapped and small children. The best course is to be smart, safe and courteous whether you are too large to fly comfortably, or you find yourself traveling with an oversized seat mate.

Have an opinion in this topic? We’d love to hear it! Please post your comments so we can keep the dialogue going about this important but sensitive topic.

Dan has traveled around the world for both business and pleasure. During his years working in high-technology start-up companies he traveled extensively throughout Asia, Europe, and the Americas. Dan and his family also travel extensively for pleasure. Although it is challenging for him to choose a favorite destination, he gravitates toward France and Japan. Dan prides himself in the ability to travel anywhere, for as long as necessary, with a single modest carry-on bag. He also has an enormous respect for local cultures and customs. Dan is President and Founder of TripInsurance.com, the online source for comprehensible, and affordable travel insurance. Dan decided to form TripInsurance.com when he encountered his own frustrations trying to navigate the insurance options for his own vacation and business travel needs. See me on Google+
PrevWhen Should You Buy Travel Insurance When You Make a Cruise Down Payment
Are You Covered in Case of Volcanic Eruption?Next